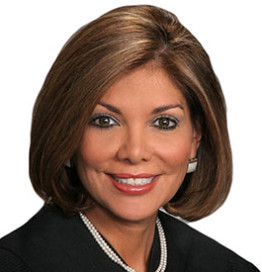 Before taking her seat on the high court, Justice Guzman served at two other levels of the state judiciary, authoring hundreds of published opinions as a justice on the Houston-based Fourteenth Court of Appeals and disposing of thousands of cases as judge of the 309th District Court in Harris County. Now in her sixteenth year on the bench, Justice Guzman consistently receives high marks in judicial evaluation polls as well as accolades from professional, civic, and law enforcement groups. Her honors and awards are many.

As the Supreme Court of Texas Liaison to the Texas Access to Justice Commission, Justice Guzman works hard to expand access to justice in civil legal matters for low-income Texans. She also chairs the high court’s Permanent Judicial Commission for Children, Youth, and Families, working with leaders across the state to improve outcomes for Texas’s most vulnerable children and families. In addition to bringing big vision to this important work, Justice Guzman lends leadership and fresh ideas to other institutions within the legal community:

Board of Trustees for The Center for American and International Law
Duke University School of Law Board of Visitors
Board of Trustees of South Texas College of Law
Executive Committee, Appellate Judges Conference-American Bar Association Judicial Division
Advisor to the American Law Institute
Before taking the bench in 1999, Justice Guzman enjoyed a successful ten-year legal career in Houston. She holds a B.B.A. from The University of Houston, a law degree from South Texas College of Law, and an LL.M from Duke University School of Law.

Married for over 25 years, Justice Guzman and her husband are parents to one daughter, who recently graduated from Harvard University.